We were hurrying back to Canada in light of the corona virus situation.

We had cancelled a ten-day southern California camping visit with our good friends and fellow RV’ers  and checked out of our campsite at Wilderness Lakes a week early. With the attractions we’d like to visit being shut down, 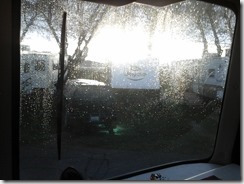 activities cancelled, the call for Canadians to return home, and the looming possibility that our travel insurance might soon be restricted or cancelled, it was surely time to go. Besides, the cold, rainy weather was very un-California-like.

We decided on our ‘usual’ five-day trip between southern California and home. That works out to about 250 miles a day – a nice, unambitious pace. We headed off Monday morning. The sun broke through the clouds for a nice start but by the time we crossed Tehachapi Pass we were into miserable rainfall.  Clouds and rain continued through the length of California, with an occasional break now and then.

I was a bit nervous because the windshield wiper repair we had done before we left had started to fail again a few days earlier – when we got our first rainy day of travel on this trip. The bolt holding the wiper arm had worked itself loose and was about to fall out. Luckily it didn’t, but a few more swipes of the windshield and there could have been hardware all over the road and me trying to see the road through a flailing wiper arm. I retightened the bolt – with a good coating of Loctite in the threads. 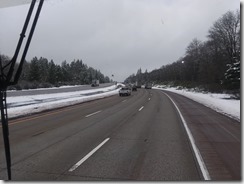 Once we were over the Siskiyou Pass, though, the weather brightened and we had no more rain. The wiper was doing fine.

For the first time I can remember, Seattle had light traffic in the afternoon, and we sailed through and on to Bellingham, a mere 25 miles from the Canadian border, to fuel up. I noticed that the tires on the driver’s side looked a little soft. I would check the pressure when we got to the campsite at Birch Bay. (It’s only about 5 miles to the border from there. We’d have an unrushed early border crossing the next morning.)

Now, set up at Birch Bay, I grabbed the pressure gauge and set off to check the tires. The outer dual first. It registered about 30 pounds (about a third of what it should be) and when I took off the gauge, the valve started hissing and spitting like an annoyed snake, especially when I moved the valve stem around. Not good. I’d deal with it tomorrow. I’m sure it was 5 o’clock somewhere. 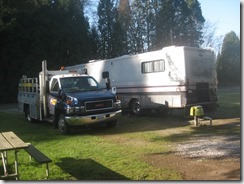 By the crisp light of the morning sun it was plain to see that the tire was completely flat. I called Good Sam roadside service and, in about an hour,  tire tech Don and his tire service truck pulled in beside the Safari. He jacked up the corner further (the coach was already up on its levelling jacks) and started dismantling the wheel. I left to go back and finish my coffee. I’m sure he didn’t need my supervision.

A short while later he came to the door. “I want to show you something.” 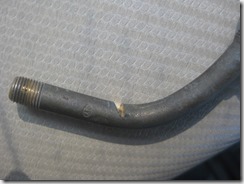 “You were right. It was the valve stem.” He showed me the old valve stem with a notch worn into it. “It shouldn’t have been mounted so it touched the wheel and got worn down like this. I’ve got it the new one in the other way. There’s a finger distance between it and the wheel. But you can still get to it to put air in it.”

He lowered the coach and put away his tools. It was about 10:30. We could finish our trip home in good time.

This time it cost me a little more out of my pocket than the last time this happened. My credit card was charged US$150.73 (about $220 Canadian – ouch!) But, at least, now I know what to watch out for.

I’m a little more introspective in my other blog. Check it out.: Remind Me Again Where I Was Going....